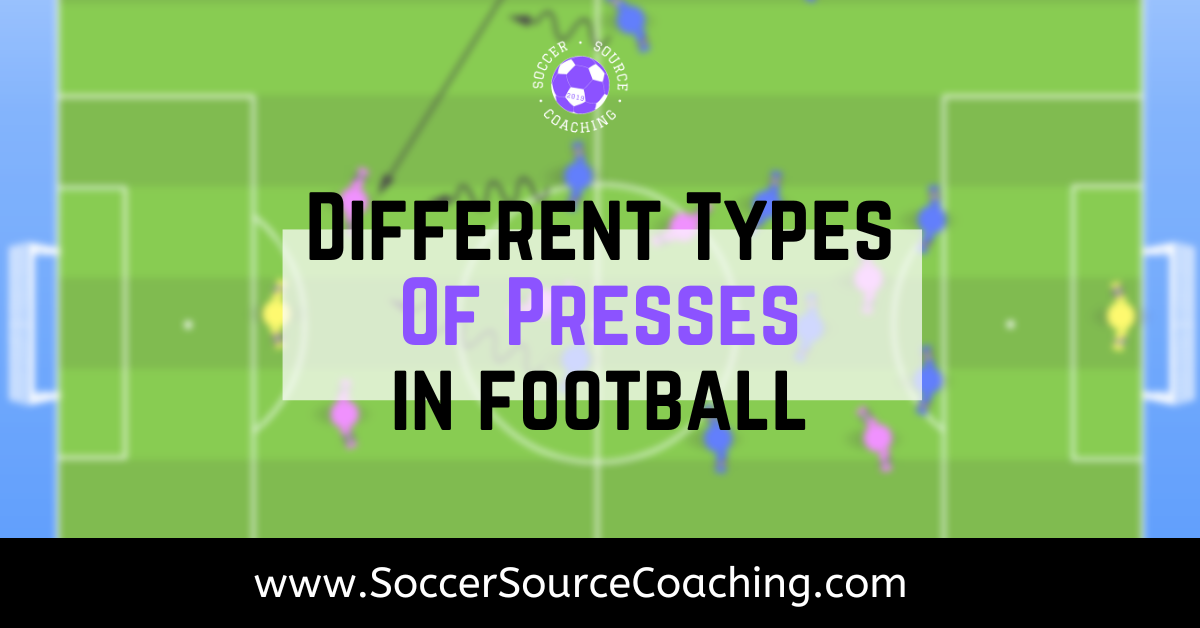 This post will go over each of the different types of presses in football, their purpose, and when they are most likely to be used by a team. Pressing in football is a tactic that many teams implement when their team is out of possession of the ball.

There are different types of presses in football depending on a few factors, this includes:

The 4 different types of presses in football

In football, there are 4 different types of presses:

I go over each type of press below in more detail.

The High Press in football

The purpose of the high press is to try and regain control of possession in the opposing team’s defensive third.

The goal of the team pressing to gain control of the ball in a more advantageous position.

This will create better scoring opportunities.

If a team is under too much pressure they may opt to play a long ball.

The high press is the most intense type of pressing out of the 4 and is very physically demanding.

Pressing high is a ‘high-risk, high-reward type of pressing.

Typically, a high press will gradually fade into a midfield press as the football match progresses.

Depending on the score of the game a team may continue to high press into the later stages of the game.

Especially if they need to score a crucial goal.

When done effectively teams can win the ball in dangerous areas of the pitch.

However, if the high press is broken it will immediately put the team on the back foot.

A team would typically want to high press when an opposition team likes to play out of the back or is not comfortable with the ball at their feet.

The team will set traps depending on either scenario.

If a team is comfortable playing out of the back the pressing team may start in an advanced position on the pitch to limit the immediate passing options the team has.

This will force them to play the ball long.

However, if the team is not comfortable playing with the ball at their feet the pressing players starting position may be a little further back to encourage the team to play short.

The pressing team will then quickly press when they see this happen.

The Midfield Press in football

The purpose of the midfield press is to contain the opposition team in their defensive half.

This type of pressing in football usually occurs in the middle third of the pitch.

The pressing team is allowing the possessing team to keep possession of the ball providing that the passing is going from side to side or backward.

But when the possessing team looks to pass a progressive pass forward the team will quickly press to ensure the next pass is backward.

A pressing team is comfortable pressing in this section of the pitch because the opposition team is still far away from their goal.

This type of press is more energy converging than the high press which means it will be used at different stages throughout the game.

A team will look to implement this type press of when the opposition team is comfortable playing out of the back and dealing with a high press.

In this situation, the risk is not worth the reward for the pressing team.

The midfield press also makes it a lot hard for space created in behind for teams to exploit, which can be a major downfall of the high press if the opposition team beats the press

A team may also want to implement this type of press during the mid to late sections of the game when they are trying to protect a goal lead or maintain a nice goal cushion.

This type of press is a lot more balanced as it allows the teams to step up quickly if a pressing trigger arises or adjust to become more defensive.

The purpose of this type of press in football is for the pressing team to become incredibly tough to break down in their own defensive third.

This usually involves all 11 players behind the ball, moving in a cohesive unit to force the opposition players away from the goal.

Doing their best to keep their defensive shape.

The pressing team will try to show the possessing team in the wide areas where the ball is easier to win, force a player into a mistake or make them play backward.

The goal of this press is to make the opposition team play backward to the middle third of the pitch so they can then try to implement a midfield press.

There are 2 incredibly common scenarios where a team will choose to implement a low-block press.

The first situation would be if they were against a team that dominates possession of the ball.

Instead of pressing high in an attempt to win the ball, they’ll sit back and absorb the pressure of the possessing team.

When they win possession back they will quickly transition and look to catch them on the counter-attack.

The second situation a team would elect to use a low-block press would be to see out a game for a crucial win or point.

An example of this would be a team winning 1-0, with 5 minutes left to play in a cup final.

A low press can be incredibly taxing, especially if the opposition team is relentless with their attacks.

For this type of press to work in football, the pressing team must remain disciplined and focused throughout the 90 minutes.

The purpose behind counter-pressing is to win the ball back within a short period of time of losing possession of the ball.

This type of press in football can occur anywhere on the pitch.

But its main focus is to be used in the opponents attacking half of the pitch.

The counter-press effectiveness relies on how quickly both teams transition from defense to attack or attack to defense depending on the team.

The quicker a team is able to transition from attack to defense the most effective the counter press will be.

A team would look to counter-press immediately after they have lost the ball.

This will either help the team:

A counter-press will work really well against a team that is slow at transitioning, not comfortable with the ball at their feet, or not prepared for it.

The counter-press is a high-intensity press that needs to be implemented at the right moments.

Continuing to counter-press beyond the first 5 to 10 seconds can result in the pressing team getting dragged out of position.

If a team implements this type of press in football must be incredibly disciplined when they do so.

Final thoughts on the 4 different types of presses in football

These are the 4 different types of pressing in football.

Throughout the entire football game, teams will use a mixture of these types of presses.

The press will largely depend on a variety of, tactics and factors.

For teams to successfully press they need to:

If you found this post helpful or know a coach that would then please it with them using our social media buttons.

4 thoughts on “Different Types Of Presses In Football |4 Variations”