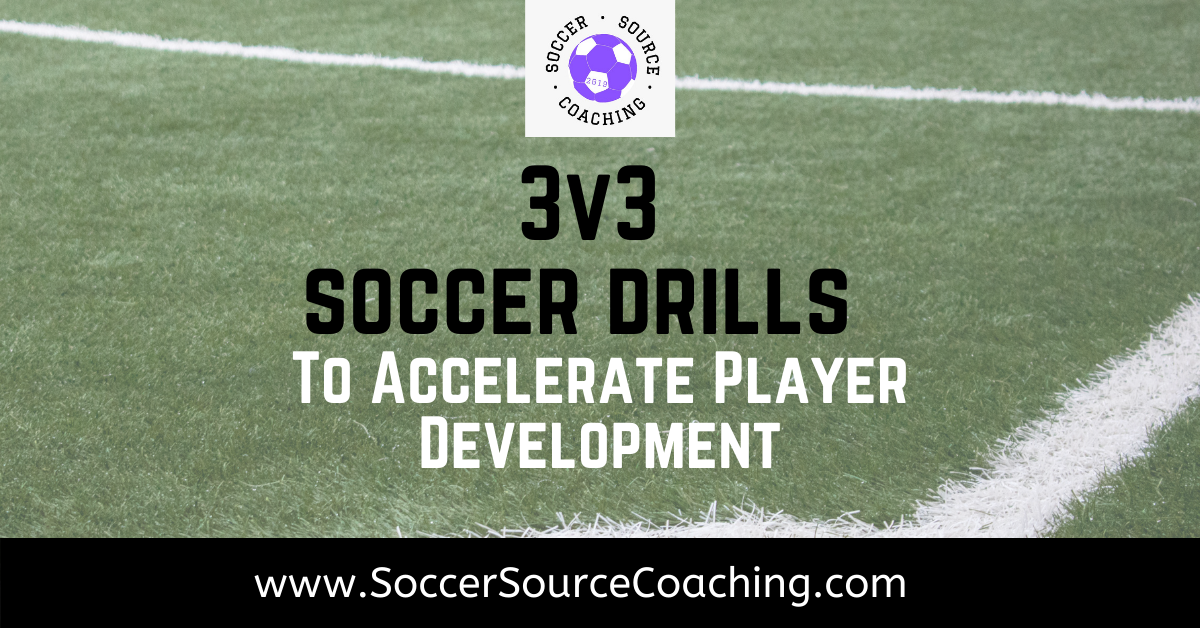 Small-sided games such as 3v3 play a huge role in developing players technically and tactically. Coaches should be looking to include 3v3 soccer drills in their soccer sessions to help accelerate the development of their players.

In 3v3 small side games, players will naturally have more touches on the ball and more decisions to make.

A study that looked into the differences comparing a 3v3 and 6v6 small-sided game found as whole 3v3 games were more beneficial for the players.

The players in the 3v3 small side games had performed more short passes, kicks, dribbles, tackles and scored more goals when compared to a 6v6 small-sided game.

It concluded by recommending coaches should implement a form of 3v3 games to support the development of players’ physical fitness and soccer technique.

In this post, I am going to give a variety of different 3v3 small-sided games and soccer drills that you can use with your teams.

Each of the 3v3 drills will have different outcomes depending on the rules and the setup to reach the desired session objective.

For these drills, I recommend that you give players positions to help them get a better understanding tactically of the game. For example having a center midfielder, a left midfielder, and a right midfielder.

Make sure you have all the soccer coaching equipment you need for the drills before starting.

The purpose of this drill is to encourage players to shoot when they feel like they have an opportunity to score from distance.

Players can experience different techniques and ideas which can give them the opportunity to shoot and score.

Set up your area and divide it into vertical thirds.

This will be a regular 3v3 game however if you are able to score a goal from the middle section of the area then that goal will be worth 3 goals instead of one.

You can also add different rules to this small-sided game to make it more challenging:

The purpose of this 3v3 small-sided game is to help players quickly transition from defense to attack.

Set your area and divide your players into 3 teams of 3, with 2 teams in the area and 1 team offside with a soccer ball.

This will be in a ‘winner stays on format’ which will encourage intense and competitive games.

The 2 teams in the middle will play a normal scrimmage with the team scoring first staying on, with the losing team coming off to be replaced by the team on the side bringing in a new ball as they come in.

The scoring team will now be defending the goal they just scored in, with the team coming on starting with the ball

If there is no goal after 3 minutes then the team that has been on the longest will come off.

At the end of the given time, the team that stays on for the most consecutive rounds will be the winning team.

Different rules you can include:

The purpose of this drill is to encourage players to track back and make recovery runs to try and get back in position after losing possession.

Create you are and line up 1 team behind 1 goal and 2 teams behind the opposite goal with a soccer per team.

To start the 3v3 soccer drill for the first time will start by combining passes and scoring in the goal opposite them. After a goal is scored that team will immediately become the defending team, defending against the team behind the goal they just scored.

When the defending team rotates out they will collect a ball and wait ready to attack again, behind the goal they originally scored on.

This process will continue (providing players are concentrating) until the time limit is up.

The purpose of this game is to get players thinking about the positions they can take up to help switch the play and identify where the space is.

Set up your area and place a goal in each of the corners facing opposite each other.

This will be a regular scrimmage however instead of defending 1 goal teams will defend 2 goals.

This will help players identify where the space is and how they can work together to score more effectively.

For goal and corner kicks they can be taken on the line with goals but in the middle.

The purpose of this soccer drill is to encourage players to transition and organize from attack to defense.

Set up your area 1 goal, the 3 teams of 3 will start behind the line that opposite goal with a soccer ball each. The first team in line will combine passes to score the goal.

As soon as the phase of play ends the team that took the shot will become the defenders with the next team combining passes becoming the attacking team.

The phase of play will be over when a goal is scored, the ball goes out of bounds, or the defending team gains possession of the ball.

The purpose of this 3v3 small-sided soccer game is to encourage players to get the ball wide and create scoring opportunities from these positions.

Once you have set up your area and made your 2 5-yard wide channels, separate your players into 2 teams of 3.

If a team is able to score a goal with an assist coming from a player in a wide area then that goal will be worth 3 goals instead of one.

If a team is able to score without an assist coming from the wide area then it will count as 1 goal.

7. 3v3 playing and supporting the striker

The purpose of this soccer drill is for players to move up the pitch to help support their striker and create attacking overloads.

With your area set it up and divide it up into 2 halves. This will be a normal 3v3 game with each team defending their own goal.

However teams in each of the teams’ defending halves there will 2 defenders and one attacker from the opposing team.

These players must stay in their respective halves until a pass is played from a defending player to the attacking player.

Once the pass is played the defending can then move into the attacking half to help support the attack.

Once the phase of play comes to an end the players will return back to their respective areas.

8. 3v3 Small side game for the defensive organization

The purpose of this soccer drill is to help teams stay organized when defending and encourage their counterattack.

This small-sided game, will be a regular game of 3v3 soccer however if teams are able to win the ball in their own half and score a goal in the same phase of play they will be rewarded with 3 goals instead of 1.

This will encourage your players to start a counter attacker or make the decision to retain possession to create a new opportunity to score.

This is a great small-sided game to use when the focus of your session is about dropping off and maintaining a ‘hard-to-break down defensive block.

You can highlight to your players how to press and how to cover in different scenarios.

The rules for this game will that similar to a regular small-sided game, however, if players are able to press the opposing team in their half, win the ball, and manage to score the goal will be worth 3 goals.

This will encourage your players to press the opposing team and help teach them when and how to press.

If your players are beginners it is recommended that on goal kicks that the players not in possession of the ball start on the halfway line.

They can only move into the area when the goal kick has been taken.

Another option is to only allow 1 or 2 players into the opponent’s half to give the opportunity for the team in possession to play out.

3v3 soccer drills and small-sided games will provide a huge benefit to your players regardless of their age and ability level.

Players are able to increase their development through 3v3 drills and games and best of all they’ll have fun while learning!

I hope these drills and small-sided games have given you inspiration and ideas that you can use with your own teams.

If you have any other 3v3 soccer drills that you use with your teams leave a comment on the post and I will get back to you!

Also if you know a coach who would find these 3v3 soccer drills and small-sided games useful then please share it with them using our social media buttons.